Vancouver – May 10, 2021 – Uranium Royalty Corp. (TSX-V: URC, Nasdaq: UROY, “URC” or the "Company") is pleased to announce it has completed the previously announced acquisition of royalty interests on the McArthur River and Cigar Lake Mines in Saskatchewan, Canada. In addition, pursuant to the transaction the Company acquired an option to acquire a royalty on the Dawn Lake project, located in Saskatchewan, Canada.

Amir Adnani, Chairman of URC, commented: "Canada’s Athabasca Basin of Northern Saskatchewan remains a key production center to provide uranium fuel to meet the growing global demand for zero carbon emission nuclear power. Along with the 1.97% Net Smelter Royalty on Rio Tinto’s nearby Roughrider project, URC has gained exposure to long-life assets with existing infrastructure and exploration upside in this important region. With major producers as operators, we are able to work with companies with strong environmental, social and corporate governance (ESG) practices and proven operational ability.”

Scott Melbye, Chief Executive Officer of URC stated: “These royalties enhance URC’s exposure to potential near- and long-term cash flow from existing world-class operations. The additional option to acquire the Dawn Lake royalty interest as part of this acquisition provides additional exposure to this early stage project. We believe these exploration lands are in a prime geological setting with proven prospectivity, all within trucking distance of two existing mills. This transaction provides URC with over 300,000 hectares of royalty exposure in the world-class Athabasca Basin. URC also values its increased exposure to projects owned and operated by industry leaders, Cameco and Orano.”

Status of the McArthur River and Cigar Lake Mines:

Pursuant to the Agreement, URC acquired the royalties and royalty options from Reserve Industries Corp. and Reserve Minerals Inc. for a total consideration of US$11.5 million, satisfied by cash and common shares. This involved drawing down US$5.0 million from the previously announced margin loan facility with the Bank of Montreal for a portion of the purchase price.

The royalty interests and options to be acquired consist of the following:

The Dawn Lake project is a large early exploration stage project located in northern Saskatchewan in Canada, approximately 700 km north of Saskatoon. The project grounds cover an area approximately between the McClean Lake mill and Cigar Lake mine.

The following map outlines the location of the Dawn Lake project: 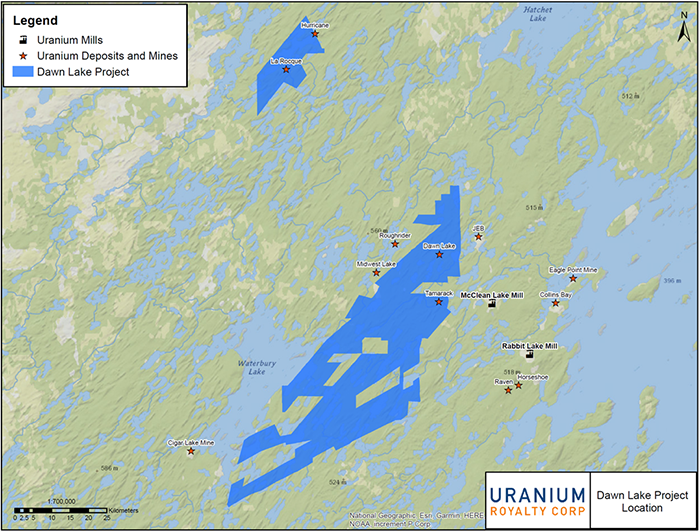 The Dawn Lake project has been active since 1977, with resources currently outlined for the Tamarack deposit, currently listed by Cameco as having 17.9 Mlbs U3O8 of indicated resources at an average grade of 4.42% U3O8, and a further 1.0 Mlbs of inferred resources.

This deposit is an unconformity-related deposit at approximately 175 to 200 m depth, located 10 km to the southwest of the McClean Lake mill. In 1978, unconformity-associated uranium mineralization was intersected on the project which later became known as the 11, 11A, 11B and 14 Zones of the Dawn Lake deposits. Development drilling on the Dawn Lake deposits occurred between 1978 and 1982. The Dawn Lake deposits do not currently have any mineral resources assigned to them by Cameco. In addition to the resources outlined above, significant uranium mineralization has been discovered at the La Rocque Lake (29.9% U3O8 over 7 m in hole Q22-040), Natona Bay (5.56% U3O8 over 5.25 m in hole Q27B-030), and Thorburn Lake (3.2% U3O8 over 8.8 m in hole Q14A-026) areas. These historical deposits do not have resources assigned to them under the framework of NI-43-101.

Uranium Royalty Corp. is a pure-play uranium royalty company focused on gaining exposure to uranium prices by making strategic investments in uranium interests, including royalties, streams, debt and equity investments in uranium companies, as well as through holdings of physical uranium. The Company's strategy recognizes the inherent cyclicality of valuations based on uranium prices, including the impact of such cyclicality on the availability of capital within the uranium sector and the current historically low uranium pricing environment. The Company intends to execute on its strategy by leveraging the deep industry knowledge and expertise of its management team and the Board to identify and evaluate investment opportunities in the uranium industry. The Company's management and the Board include individuals with decades of combined experience in the uranium and nuclear energy sectors, including specific expertise in mine finance, project identification and evaluation, mine development and uranium sales and trading.

Darcy Hirsekorn, the Company's Chief Technical Officer, has supervised the preparation of and reviewed the technical information contained in this presentation. He holds a B.Sc. in Geology from the University of Saskatchewan, is a qualified person as defined in National Instrument 43-101 and is registered as a professional geoscientist in Saskatchewan.

Unless otherwise indicated, the scientific and technical information disclosed herein is based upon Cameco’s Annual Information Form for the Year Ended December 31, 2020 and Cameco's other public filings and, in the case of the Dawn Lake Project, also the historical uranium deposit information outlined in the Saskatchewan Mineral Deposit Index (SMDI).

Neither the TSX-V nor its Regulation Services Provider (as that term is defined in policies of the TSX-V) accepts responsibility for the adequacy or accuracy of this release.