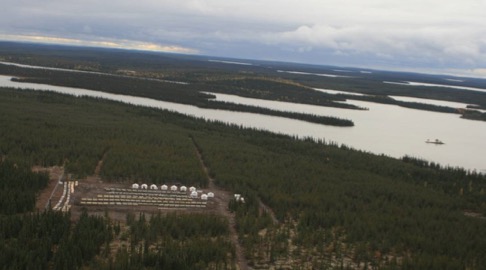 The information below regarding project milestones and recent developments for the Roughrider Project has been summarized from the Roughrider Technical Report, a copy of which is available under the Company's profile on SEDAR (www.sedar.com), as well as from Rio Tinto's public disclosure.

The Company is treating the Historic Roughrider Technical Report(1) and the mineral resource estimate therein as historical in nature and notes that a qualified person has not done sufficient work to classify the historical estimates as current mineral resources. There are no other recent estimates or data available for the Roughrider Project and a detailed study of the current technical data relating to the property, together with the preparation of an updated development plan is required to be conducted in order to update these historical estimates as current resource estimates. The Company is disclosing the Historic Roughrider Technical Report(1) and the estimates contained therein for illustrative purposes, to provide readers with relevant information regarding the Roughrider Project. There are numerous uncertainties inherent in the historical estimate, which is subject to all of the assumptions, parameters and methods used to prepare such historical estimate.

The Roughrider Royalty is a 1.9701% net smelter return royalty payable pursuant to the interest that Rio Tinto Canada Uranium Corporation or any of its subsidiaries, assignees or successors holds from time to time in the underlying property. The Roughrider Royalty also applies to the Russell Lake and Russell Lake South projects, which are considered to be Early Exploration stage projects, located in the south-eastern rim of the Athabasca Basin.

After acquiring the Roughrider Project, Rio Tinto continued to advance it. In July of 2013, Rio Tinto submitted an Advanced Exploration Program proposal for consideration to the Saskatchewan Ministry of Environment. The program was intended to initiate EIS review of the project, with the project intended to provide direct data related to the ore and mine development design. The proposal involved establishment of an upgraded access road, development of an exploration shaft, exploration drifts, operation of a water treatment facility, additional surface support structures, and temporary surface storage of both development rock and low-grade waste. The application was partially through the EIS review process, but no official determination was completed. (Saskatchewan Environment Publication 2013-014, “Rio Tinto – Roughrider Advanced Exploration Program”)

In August of 2017, Rio Tinto announced that it had fully impaired the Roughrider asset. Since acquiring the Roughrider Project, Rio Tinto has not disclosed any updated resource or reserve estimates for the project.