Proven and production ready mine, set to take advantage of improving uranium prices 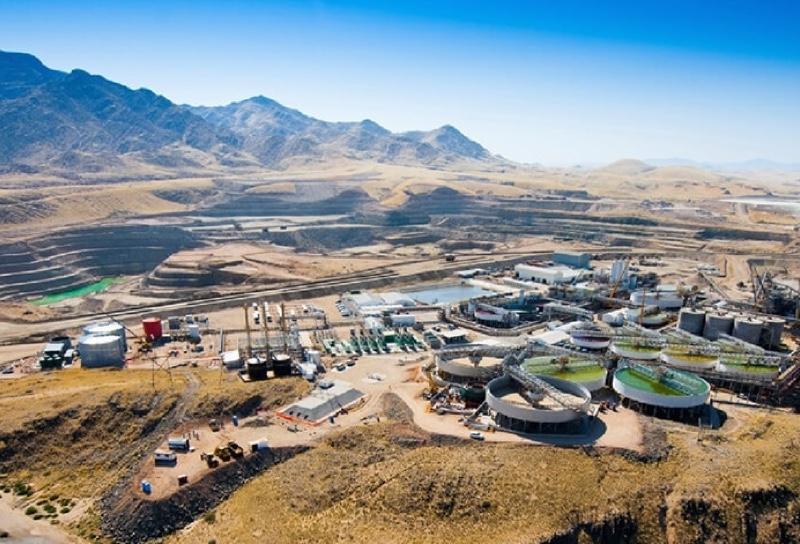 According to publicly available information, the Langer Heinrich Mine is located in Namibia, 80 kilometers east of the major seaport of Walvis Bay and about 40 kilometers south-east of the large-scale, hard-rock Rössing uranium project operated by a subsidiary of Rio Tinto plc. The mine is a surficial calcrete type uranium deposit. The project is operated by Langer Heinrich Uranium (Pty) Ltd., a company that is 75% owned by Paladin Energy Ltd. ("Paladin") and 25% owned by CNNC Overseas Uranium Holding Limited, a wholly owned subsidiary of the China National Nuclear Corporation.

Construction of the Langer Heinrich Uranium Project commenced in 2005, and staged commissioning of the plant began in August 2006. The mine was officially opened in March 2007. On May 25, 2018, Paladin announced that the Langer Heinrich Mine was to be placed on care and maintenance and stopped presenting ore to the plant because of persistently low uranium prices.

In an ASX release dated April 1, 2022 related to the successful completion of a A$200M placement, Paladin disclosed plans to begin the formal restart of the project in July 2022 and that Paladin was targeting commercial production from the Langer Heinrich mine to begin in CY2024.

Note that the estimates in the above table:

In a release dated November 4, 2021, Paladin Energy Ltd. ("Paladin") announced an update to the Langer Heinrich Restart Plan and indicated that the restart work technical programs are now complete. Paladin disclosed that the restart of the Langer Heinrich Mine will only be considered upon it securing additional long-term contracts with sufficient duration and value to underpin an appropriate return to stakeholders, and it will not be providing guidance on the hurdle price required to support a decision to restart the mine. Paladin also disclosed an updated mineral resource and ore reserve estimates for the Langer Heinrich mine. Paladin disclosed that the update confirms the restart cost estimate of US$81 million and a 17-year mine life supported by ore reserves of 84.8 million tonnes with an average U3O8 grade of 448 ppm. The life of mine production target increased to 77.4 million pounds of U3O8 (previously 76.1 million pounds). The estimated life of mine C1 costs have been updated to US$27.40/lb (previously US$26.90/lb), primarily due to increased estimated contract mining rates. Paladin has also confirmed an estimated project execution timeframe of 18 months from project commencement to first production, with full production achieved after a further 15 months.

In an ASX release dated April 1, 2022 related to the successful completion of a A$200M placement, Paladin disclosed plans to begin the formal restart of the project in July 2022 and that Paladin was targeting commercial production from the Langer Heinrich mine to begin in CY2024.

The information below regarding project milestones and recent developments for the Langer Heinrich Mine has been summarized from Paladin's public disclosure and from other publicly available materials.

Paladin filed a resource estimation in April of 2005, and in July of 2005, announced that the Ministry of Mines and Energy in Namibia approved the grant of a mining licence covering the Langer Heinrich deposit for a 25-year term. Initial construction at the Langer Heinrich project started in September 2005, leading to the mine's official opening in March of 2007.

In its annual report for the year ended June 30, 2019, Paladin announced that in February 2019 it had completed a concept study that identified multiple options to reduce operating costs, improve process plant performance and potentially recover a saleable vanadium product. The annual report also disclosed that Paladin had commenced a two-stage pre-feasibility study respecting a potential re-start of mining operations at the Langer Heinrich Mine upon a sustained recovery in uranium prices.

On June 30, 2020 Paladin announced the result of the Langer Heinrich Restart Plan, which refined the results of the previous Prefeasibility Report. The Restart Plan is based on a re-sequencing of mining and processing activities outlined in the 2019 PFS and takes elements from both the PFS 5.2Mlb Option and the PFS 6.5Mlb Option. The release states that the mine could be brought back into production for US$81M of pre-production cash expenditure. The release also states a C1 Cost of Production of US$27/lb and a 17-year mine life with peak production of 5.9 Mlbs of U3O8 for seven years. The Life of Mine Plan outlines three distinct operational phases; Ramp-Up (Year 1), Mining (Years 2 – 8) and Stockpile (Years 9 – 17). The Restart Plan also re-stated the Mineral Resources associated with the project, explicitly including the ROM stockpiles in the Resources. The underlying in-situ Mineral Resource as announced on October 14, 2019 remains unchanged, as are the tonnes and grade stated for ROM stockpiles in the same announcement. Further details available in the ASX announcement. 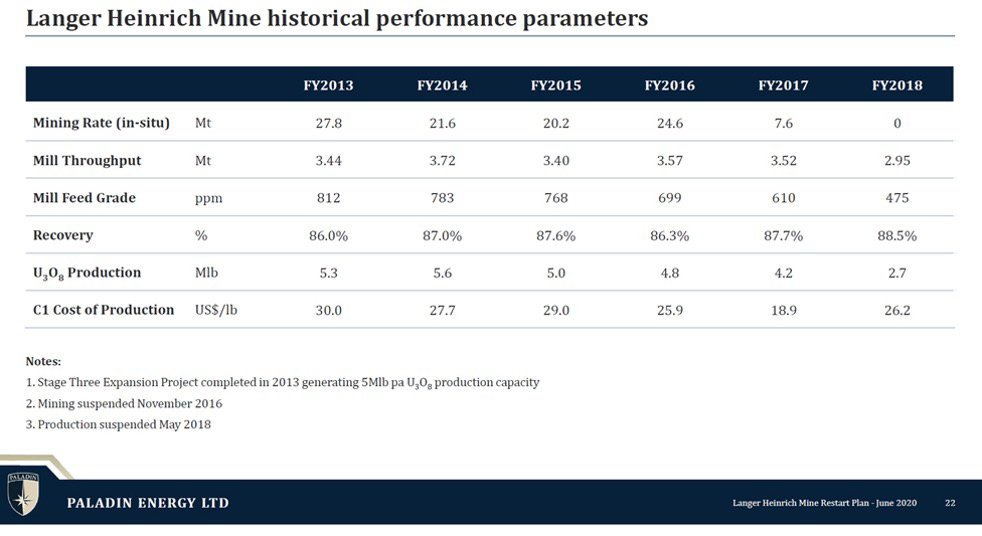