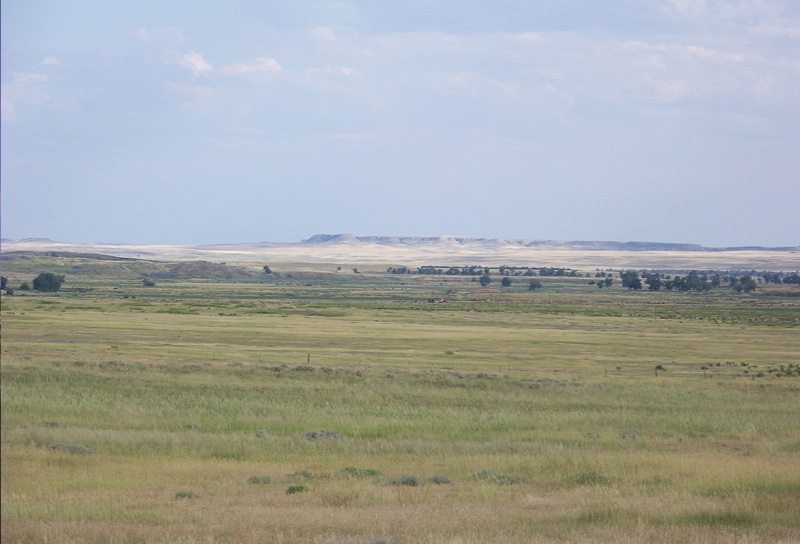 The Dewey-Burdock Project is an Advanced stage ISR uranium project located in the Edgemont uranium district of South Dakota, USA and is comprised of 12,613 surface acres and 16,962 net mineral acres. According to publicly available information, the property is owned and operated by Azarga Uranium Corp. (“Azarga”), a subsidiary of enCore Energy Corp. (“enCore”), which has announced that the Dewey-Burdock Project is its initial development priority.  Access and mineral rights are currently held by a combination of 53 private surface use, access and mining lease agreements, two purchase agreements and 370 federal mineral claims in and surrounding the Dewey Burdock Project area. Private lease renewals range from an annual basis to a long-term basis.

The preliminary economic assessment of the Dewey-Burdock project states all values in U.S. dollars and used a constant uranium price of US$55 per pound. Azarga stated that the estimated initial capital costs for the first two years of the project life are approximately US$31.7 million with sustaining capital costs of approximately US$157.7 million spread over 17 years of operation. Direct cash operating costs were estimated at approximately US$10.46 per pound of U3O8 produced excluding royalties and severance and conservation taxes. U.S. federal income tax was estimated to be US$3.39 per pound. The total estimated pre-tax and post-tax capital and operating costs average approximately US$28.88 per pound and US$32.27 per pound U3O8 produced, respectively. The preliminary economic assessment estimated pre-tax and post-tax net earnings over the life of the project of US$372.7 million and US$324.4 million, respectively, a pre-tax internal rate of return of 55%, a net present value of US$171.3 million, a post-tax internal rate of return of 50% and a net present value of US$147.5 million applying an 8% discount rate.

The Dewey-Burdock Royalty was created pursuant to a quitclaim deed and assignment between Neutron Energy, Inc. (acquired by Westwater Resources Inc. in 2012) and Powertech (USA) Inc., dated January 12, 2009. This agreement also includes certain rights of the royalty holder to require any of the underlying property rights to be re-conveyed to it to the extent that, among other things, the payor determines to abandon, not maintain in good standing or not renew any such rights or fails to hold, maintain and operate any such property as a diligent and prudent operator.

On September 7, 2021, Azarga announced that the company had entered into a definitive agreement with enCore whereby enCore would acquire all of the issued and outstanding common shares of Azarga Uranium pursuant to a court-approved plan of arrangement. Azarga reported on November 16, 2021, that the shareholders of Azarga Uranium have approved the plan of arrangement. In addition, they stated that closing of the plan of arrangement is subject to the receipt of applicable regulatory approvals and the satisfaction of certain other closing conditions customary in transactions of this nature, including, without limitation, the final stock exchange approval.

On January 4th, 2022, enCore Energy announced the closure of the previously announced plan of arrangement, acquiring all the shares of Azarga Uranium Corp. EnCore subsequently announced on February 14, 2022 that the U.S. Nuclear Regulatory Commission (“NRC”) had accepted the change of control over the Dewey Burdock Source and By-Product Materials License.

The information below regarding project milestones and recent developments for the Dewey-Burdock Project has been summarized from technical reports available under Azarga's profile on SEDAR (www.sedar.com), and from Azarga's public disclosure.

In December 2018, Azarga filed a technical report which included the following mineral resource estimates: 7.53 million short tons or 6.83 million tonnes of combined measured and indicated resources at an average grade of 0.113% U308 returning 16.94 Mlbs U308 for the ISR resources only.

Azarga announced that on July 20, 2018, the United States Court of Appeals for the District of Columbia Circuit (the "DC Circuit Court") ruled on the Oglala Sioux Tribe's motion for summary disposition and its request to stay or revoke the NRC licence issued in relation to the Dewey-Burdock Project. Azarga's disclosure stated that the DC Circuit Court supported the NRC's decision to maintain the licence, though indicated that the NRC must ensure it complies with the requirements under the National Environmental Policy Act to complete the licence application and that the primary point of contention was the lack of sufficient archeological surveying on the project to identify potential impacts to the Oglala Sioux Tribe's cultural and historical resources.

Azarga announced that the NRC issued a decision on January 31, 2019, upholding the effectiveness of the Dewey-Burdock Project NRC licence in consideration of the remand from the DC Circuit Court. Azarga's disclosure stated that the NRC reasoned that the radioactive materials and waste licence may remain in place, while proper historical preservation measures are being explored, because other permits from the state of South Dakota and the EPA have not been granted.

In May 2019, Azarga announced that the Atomic Safety and Licensing Board issued an order granting the NRC staff's motion to set a schedule for an evidentiary hearing pertaining to the final contention for the Dewey-Burdock Project NRC licence and that such decision provided the NRC staff and Azarga with an opportunity to resolve such final contention. Azarga further announced that the timeline established by the Atomic Safety and Licensing Board set November 29, 2019 as the decision date on the matter. In its management’s discussion and analysis for the six months ended June 30, 2019, Azarga disclosed that its NRC licence remained in good standing.