Vancouver – February 11, 2021 – Uranium Royalty Corp. (TSX-V: URC, US: URCCF, “URC” or the "Company") is pleased to announce it has entered into a definitive agreement to acquire existing royalty interests on the McArthur River and Cigar Lake Mines in Saskatchewan, Canada.

Total consideration payable by the Company under the transaction is US$11.5 million, which will be satisfied by the Company on closing by paying US$10.0 million (approximately C$12.7 million) in cash and issuing 970,017 common shares. The cash portion of the purchase price will be financed through cash and securities on hand.

Amir Adnani, Chairman of URC, commented: "Our launch strategy for URC has been to build the first and only uranium focused royalty company to capitalize on a global resurgence in the commodity. This accretive acquisition capitalizes on our first mover advantage to become a royalty holder on two of the most significant mines in the sector. Canada’s Athabasca Basin of Northern Saskatchewan is the premier region for high-grade conventional mining and our growing royalty portfolio in this district, which includes a 1.97% Net Smelter Royalty on Rio Tinto’s nearby Roughrider project, provides URC with exposure to long-life assets with existing infrastructure and exploration upside covering approximately 270,000 hectares of ground.  With major producers as operators, we have the benefit of counterparties with proven operating track records and best in class environmental, social and corporate governance (ESG) practices.”

Scott Melbye, Chief Executive Officer of URC stated: “This transformational transaction provides URC a key building block for our business with exposure to potential near- and longer-term cash flow from existing world-class operations. The production track-record of McArthur River and Cigar Lake demonstrates the true scale of these mines. As of the end of December 2020, the two mines have produced a total of ~418 Mlbs of U3O8, with 325 Mlbs from McArthur River and 93 Mlbs from Cigar Lake. There is also scope for production growth once operations resume, as the joint venture partners, Cameco and Orano, have disclosed receipt of permit approvals to further increase production up to 43 Mlbs U3O8 per year. In addition, the operators have demonstrated strong commitment to stakeholder relations in the area of indigenous employment, training, and local economic development.”

Status of the McArthur River and Cigar Lake Mines:

Pursuant to the Agreement, URC has agreed to acquire the royalties from Reserve Industries Corp. and Reserve Minerals Inc. for a total purchase price of US$11.5 million (approximately, C$14.6 million). The purchase price will be satisfied on closing by URC paying US$10.0 million in cash and issuing to Reserve 970,017 common shares. *The transaction is subject to customary closing conditions, including receipt of requisite approval of the TSX Venture Exchange (the "TSX-V") and requisite consents.

URC currently expects to finance the transaction through its current cash position and holdings of listed securities.

The royalty interests to be acquired consist of the following:

Background on Reserve Minerals, the Seller of McArthur and Cigar Lake Royalties

Reserve Minerals is a subsidiary of U.S. based Reserve Industries Corporation, a family business, owned and operated by the Melfi family of New Mexico since 1957. The brothers, Frank, Bill, and James started business activities in Saskatchewan in the late 1970’s with Reserve Oil and Minerals in the earliest days of exploration and discovery in the Athabasca Basin. The company acquired an equity stake in ground that today represents a large portion of the eastern Athabasca. The company later established and maintained a royalty position that ultimately paid off with the discovery of the world-class McArthur River and Cigar Lake mines on ground covered by the royalty.

The following map outlines the location of each of the projects underlying the royalties to be acquired under the Agreement: 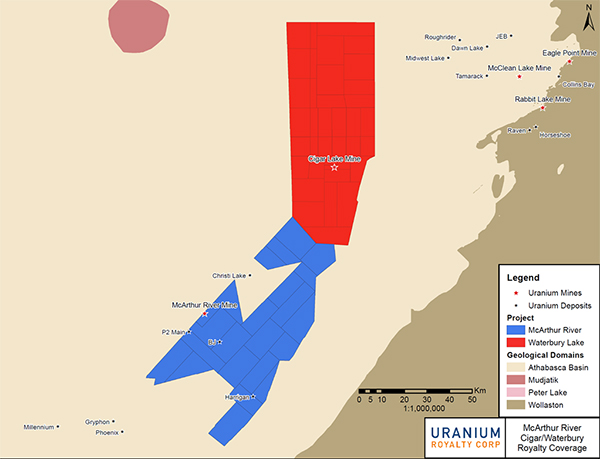 The McArthur River Mine is a fully developed underground mine operation located in Northern Saskatchewan, Canada approximately 620 km north of Saskatoon. The mine is currently owned by a joint venture between Cameco (69.805%) and Orano (30.195%). The mine went into production in 1999 and, in 2018, Cameco disclosed that it was put on care and maintenance due to weak uranium market conditions.

Mining at McArthur River utilizes unique ground freezing to mitigate risks of high pressure ground water and a blend of blasthole stoping and raise-bore mining. The ore is ground, thickened and blended into a slurry which is then shipped 80 km south to the Key Lake mill for processing and production of calcined uranium ore concentrate. The McArthur River project is comprised of one mineral lease, ML 5516, covering 1,380 hectares, and a further 23 mineral claims totaling 84,508 hectares. The McArthur River deposit was discovered in 1988 and went into production in 1999.

The McArthur River deposit is a high-grade, unconformity-related uranium deposit with an average stated grade of 6.89% U3O8 for remaining reserves disclosed by Cameco as at December 31, 2020. Mineralization occurs between 500 to 640 metres below surface with a strike length of approximately 1800 m. In addition to the resources outlined at the McArthur River Mine, several historical uranium deposits and showings have been discovered on the project. These include the P2 Main, BJ Lake, and Harrigan Zone showings. These historical deposits do not have any resources attributed to them.

The Cigar Lake Mine is a fully developed operation located in Northern Saskatchewan, Canada, approximately 660 km north of Saskatoon. Cameco has disclosed that it is the world's highest-grade uranium mine. The Cigar Lake Joint Venture partners are currently Cameco (50.025%), Orano Canada Inc. (37.1%), Idemitsu Canada Resources Ltd. (7.875%), and TEPCO Resources Inc. (5%). The Cigar Lake deposit was discovered in 1981 and placed into production in 2014. In December 2020, Cameco announced that it had suspended operations at Cigar Lake due to impacts from COVID-19.

Ore is mined at Cigar Lake utilizing unique ground freezing from surface to mitigate risks of high pressure ground water and increase geotechnical stability and vertical jet boring technology from underground. The ore is ground, thickened and blended into a slurry which is then shipped 69 km south to the McClean Lake mill for processing and production of calcined uranium ore concentrate.

The Cigar Lake deposit is a high-grade, unconformity-related uranium deposit with an average stated grade of 15.92% U3O8 for the above-estimated reserves. The mineralization occurs between 410 to 450 metres below surface with a strike length of approximately 1950 m. In addition to the resources outlined above, the historical Tibia Lake showing has been outlined approximately 800 meters north of the Cigar Lake mine, though the deposit does not have any resources attributed to it as disclosed by Cameco.

Uranium Royalty Corp. is a pure-play uranium royalty company focused on gaining exposure to uranium prices by making strategic investments in uranium interests, including royalties, streams, debt and equity investments in uranium companies, as well as through holdings of physical uranium. The Company's strategy recognizes the inherent cyclicality of valuations based on uranium prices, including the impact of such cyclicality on the availability of capital within the uranium sector and the current historically low uranium pricing environment. The Company intends to execute on its strategy by leveraging the deep industry knowledge and expertise of its management team and the Board to identify and evaluate investment opportunities in the uranium industry. The Company's management and the Board include individuals with decades of combined experience in the uranium and nuclear energy sectors, including specific expertise in mine finance, project identification and evaluation, mine development and uranium sales and trading.

Darcy Hirsekorn, the Company's Chief Technical Officer, has supervised the preparation of and reviewed the technical information contained in this presentation. He holds a B.Sc. in Geology from the University of Saskatchewan, is a qualified person as defined in National Instrument 43-101 and is registered as a professional geoscientist in Saskatchewan.

Except where otherwise stated, the Company's disclosure herein relating to properties subject to its royalties or proposed royalties is based primarily on information publicly disclosed by the owners or operators of such properties, as is customary for royalty portfolio companies of this nature. Specifically, as a royalty holder, the Company has limited, if any, access to the properties subject to its interests. The Company generally relies on publicly available information regarding these properties and related operations and generally has no ability to independently verify such information. In addition, such publicly available information may relate to a larger property area than that covered by the Company's interests.

Certain statements in this news release may constitute “forward-looking statements”, including those regarding the expected completion of proposed acquisitions, uranium markets and expectations regarding projects in which the Company has an interest. Forward-looking statements are statements that address or discuss activities, events or developments that the Company expects or anticipates may occur in the future. When used in this news release, words such as “estimates”, “expects”, “plans”, “anticipates”, “will”, “believes”, “intends” “should”, “could”, “may” and other similar terminology are intended to identify such forward-looking statements. Forward-looking statements reflect the current expectations and beliefs of the Company’s management. These statements involve significant uncertainties, known and unknown risks, uncertainties and other factors and, therefore, actual results, performance or achievements of the Company and its industry may be materially different from those implied by such forward-looking statements. They should not be read as a guarantee of future performance or results, and will not necessarily be an accurate indication of whether or not such results will be achieved. A number of factors could cause actual results to differ materially from such forward-looking statements, including, without limitation, any inability to satisfy conditions to completion of the transaction or to complete the transactions as contemplated or at all, any ability of such operators to achieve production, risks inherent to royalty companies, uranium price volatility, risks related to the operators of the projects underlying the Company’s existing and proposed interests and those other risks described in the Company’s Management's Discussion and Analysis for the year ended April 30, 2020 and other disclosure documents, available on SEDAR at www.sedar.com. These risks, as well as others, could cause actual results and events to vary significantly. Accordingly, readers should exercise caution in relying upon forward-looking statements and the Company undertakes no obligation to publicly revise them to reflect subsequent events or circumstances, except as required by law.

Neither the TSX-V nor its Regulation Services Provider (as that term is defined in policies of the TSX-V) accepts responsibility for the adequacy or accuracy of this release.